Starting from 24th of February 2022 the Aircraft Operators are able to plan their flights freely across the airspace of Bulgaria, Hungary, Romania, Slovakia and Republic of Moldova 24/7 without the limitations of the geographical boundaries. The inclusion of the airspace of the Republic of Moldova represents the second expansion of the SEE FRA project (South East Europe Free Route Airspace, successfully implemented on the 7th of November 2019), thus making possible cross border free route operations across the airspace of the 5 states. Therefore, SEE FRA becomes one of the largest free route airspace blocks in Europe.

In addition to the SEE FRA expansion cross border operations between SEE FRA and BALTIC FRA are also implemented which makes airspace spanning from the Black Sea to the Baltic Sea open for free route operations.

The new flight planning rules significantly optimize the flight trajectories not only by using the shortest connections but also allowing the use of the most effective routings when the impacts on the flights are inevitable e. g. adverse weather avoidance.

According to the simulations, SEE FRA contributes to a significant reduction of emissions and of millions of miles (NM) daily, from the total mileage.

It should be acknowledged that the Network Manager has a central role as an enabler and driver of the airspace improvements at European level. Thanks to the active involvement and full support of EUROCONTROL Member States and EUROCONTROL Agency, the Aircraft Operators will be able to fly on optimised profiles, using less fuel, hence reducing aviation´s environmental footprint. 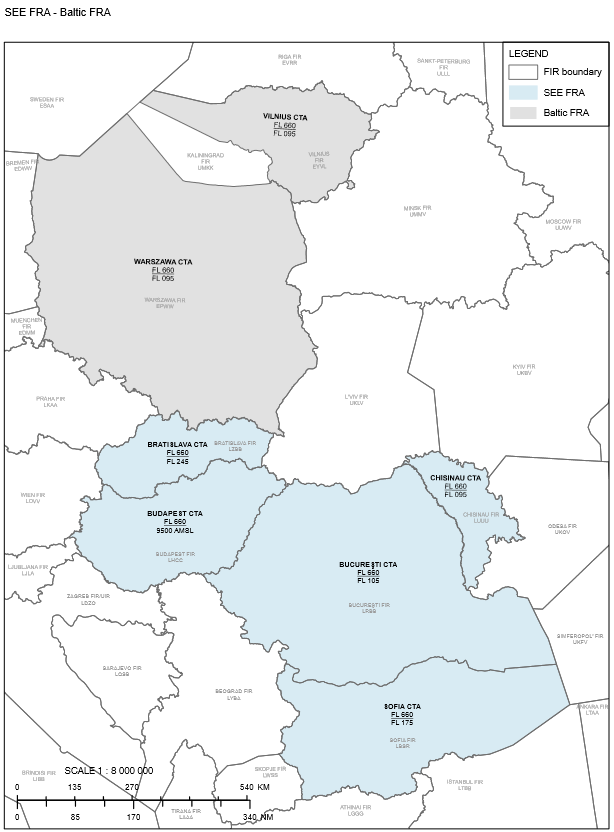